Size750mL Proof80 (40% ABV)
Made using organic, fair trade coffee beans, this liqueur can be sipped neat or used in a variety of cocktails.
Notify me when this product is back in stock. 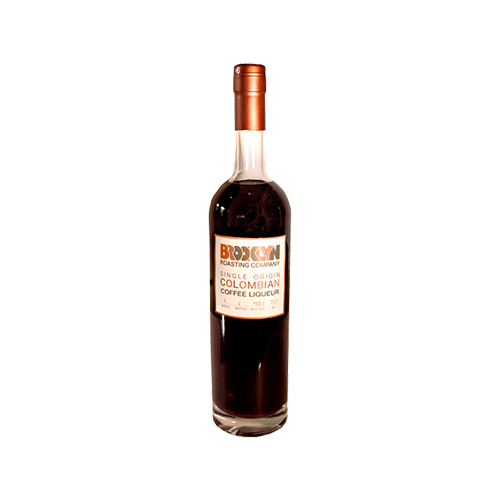 Since opening its doors in the fall of 2011, the Brooklyn Roasting Company has been meticulously sourcing fair trade, organic coffee beans from across the Bean Belt — the area of the world between the Tropic of Cancer and the Tropic of Capricorn. The Bean Belt's moderate temperatures and steady rainfall, along with its rich, fertile soil, produce beans that result in amazingly flavorful coffee.

In 2012, the Brooklyn Roasting Company sourced coffee beans from the Santa Barbara Estate, situated in the high mountains of central Colombia. Santa Barbara's near-constant temperature (generally around 75-80° F all year), high altitude and nutrient-rich volcanic soil are ideal for growing the Castillo varietal of Arabica coffee, a flavorful hybrid of the Caturra and Timor trees.

The Santa Barbara Estate was established over three decades ago by Don Pedro Echavarria and is the modern continuation of a coffee dynasty established by Echavarria's ancestors (his great-great grandfather-in-law is credited with being the first Colombian coffee exporter). The estate is entirely integrated, meaning that Echavarria and his team control all stages of production, including planting the coffee trees, picking the coffee cherries and milling the beans. As a result, Echavarria is able to keep closer watch over the beans as they develop, and produce a more consistent coffee.

Once the beans are imported to Brooklyn, they are roasted at the Brooklyn Roasting Company in small batches using a Loring Kestrel 1/2 bag roaster — the most advanced small-scale commercial roaster available — in order to create the perfect roast. After roasting, the beans are transported three miles to the Cacao Prieto Distillery, which is situated in the Red Hook neighborhood of Brooklyn.

At Cacao Prieto, the beans are infused into an organic cane juice (the sugar cane is sourced from the Dominican Republic), and then distilled through a 1,000 liter, Christian Carl copper still imported from Germany. The resulting distillate is sweetened with a touch of cane sugar and aged in used bourbon barrels for approximately three months.

After its beauty rest, each bottle of the 80-proof liqueur is filled and labeled by hand. Brooklyn Roasting Company Colombian Coffee Liqueur has robust notes of bittersweet chocolate and coffee, with subtle hints of citrus, oaky spices and vanilla that complement its flavor.

"One thing is certain," says Celina Perez, the distiller at Cacao Prieto, "it isn't a coffee liqueur for the faint of heart."Pick up a bottle today!

Robust notes of bitter chocolate and coffee, with subtle hints of citrus, oaky spices and vanilla that complement a mellow flavor.