Size750mL Proof34 (17% ABV)
Crafted with dried elder tree blossoms that get soaked in alcohol and water, this liqueur invokes the summer with its fresh, bright, and deliciously floral profile.
Notify me when this product is back in stock. 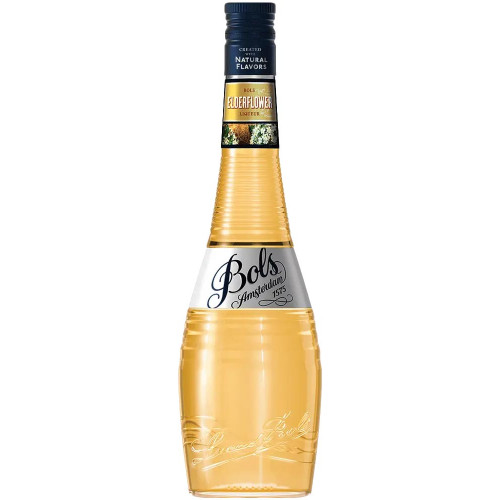 In 1575 the Bols family opened the doors of a small distillery in Amsterdam. Lootsje, as it was called, produced liqueurs. Lucas Bols was born in 1652. The founder's grandson acquired a major share in the Dutch East India trading company, gaining access to exotic herbs and spices, which resulted in him creating over 300 recipes, shipping liqueurs around the world and creating the groundwork for the Bols company that we know today.

In 1664 Bols was mostly producing Dutch gin or genever, crafting a milder, subtle variation of the spirit. Once it reached the US market it turned out to be a major player in the cocktail revolution. It was in 1883 that Bols began maturing their genevers in French Limousin casks, a practice that they resurrected in 2010.

The company has since relocated its seat back to Amsterdam, where it all began, opening a bartending academy as well as The House of Bols, an interactive tour that takes visitors through the world of cocktails and genever. They relaunched the latter, based on the original 1820 recipe — the historic Bols Genever. The Bols distillery has since re-opened in Amsterdam, producing liqueur and genever with nearly half a millennium of heritage.

Bols Elderflower Liqueur is crafted with blossoms of the elder tree which have a distinct honey scent to them. The dried blossoms are soaked in alcohol and water to bring out the aromas and tastes. Fresh, fragrant, and floral, it's made with natural botanicals to invoke the spirit of summer.

This liqueur is fresh and fragrant with a delicate floral nose with honey and elder blossoms. It's sweet on the palate that culminates in a bright and citrusy finish.