Caskers Rewards members earn up to 4 store points back when buying this bottle.
Size750mL Proof90 (45% ABV)
This Maple Flavored Whiskey has a 100% corn mash, it’s distilled and then aged in used Black Fly Bourbon barrels that were previously used to age Black Rooster maple syrup.
Notify me when this product is back in stock. 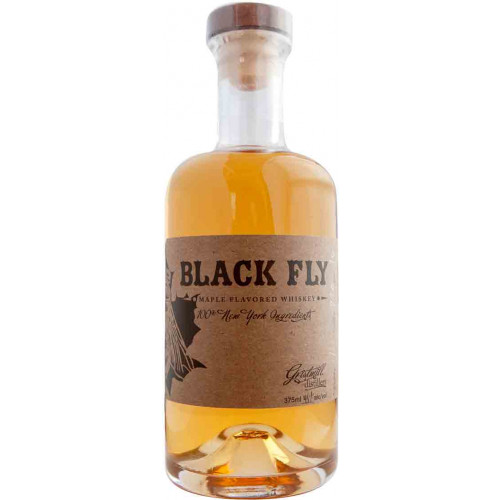 Their Maple Flavored Whiskey starts out with a 100% corn mash bill. It is then distilled and then aged barrels previously used for Black Fly Bourbon barrels. After its initial beauty rest, the whiskey takes an unexpected sweet detour. The whiskey is then finished in ex bourbon, ex maple syrup barrels. The makers of Black Rooster Maple in Keene, age special batches of their maple syrup in Black Fly bourbon barrels, returning them to the distillery to age their whiskeys. The resultant corn distillate is then mixed with a jug of the neighboring Black Rooster’s un-aged maple syrup. Black Fly proof’s their Maple Flavored Corn Whiskey a bit higher than their other whiskies. The result is an ""oaky warmth with a balanced slight maple sweetness, an aged whiskey full of real, natural maple flavor; a harmonious mixture of corn from the Champlain Valley and maple from the heart of Keene.""

Subtle notes of maple syrup and wood on the nose. Note of corn and baking spices on the palate with hints of bourbon. The finish is light, with a hint of maple.