Size750mL Proof123.8 (61.9% ABV)
This nine-and-a-half year old whiskey, which won Double Gold at the 2016 San Francisco World Spirits Competition, is bottled at a punchy 123.8 proof.
Notify me when this product is back in stock. 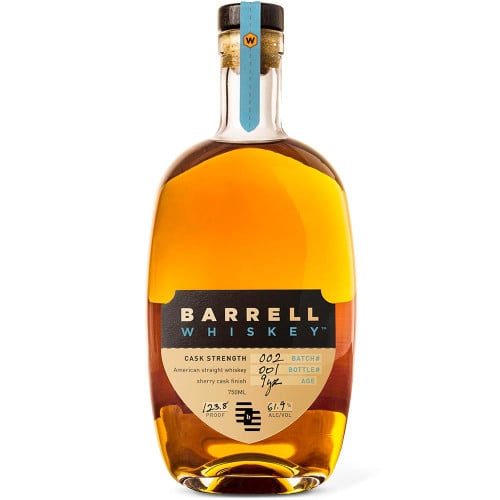 About Barrell Whiskey Batch No. 2

“I started this company to share my passion for unique, high-quality spirits,” says Joe Beatrice, founder of Barrell Craft Spirits, whose self-proclaimed goal is to find and curate the best barrels and batches of whiskey, wherever they may be. To preserve the singular characteristics of each batch, Barrell bottles all their whiskeys at cask strength. “The complexity and concentration of flavor is greatest when the whiskey comes right from the barrel,” says Beatrice.

Barrell Whiskey Batch #002 is made from a mashbill of corn, rye and malted barley. The whiskey was distilled in Indiana and matured in Kentucky for nine-and-a-half years in ex-bourbon barrels. While using ex-bourbon barrels (as opposed to new American oak barrels) means the whiskey cannot be called bourbon, the “used barrels allow the expression of many subtler, complex flavors masked by the abundant wood sugars in new barrels,” says Beatrice.

This batch was bottled at cask strength (123.8 proof) without the use of chill-filtration (chill filtration removes the cloudiness that is natural to whiskey, but also removes the fatty acids and esters which contribute to the whiskey’s overall flavor and complexity). As a result, the whiskey has a sun-drenched, golden color along with an aroma of graham crackers, cooked peaches, tobacco and cherry jam. The palate is filled with lush notes of sherry, apricots and rye toast, and leads to an oily finish complete with hints of cured ham, dates and fresh melons.

Each batch of Barrell is different, and once sold out, it’s gone forever. Get your bottle of Barrell Whiskey Batch #002 while it’s still available!

Sun-drenched, golden color along with an aroma of graham crackers, cooked peaches, tobacco and cherry jam. The palate is filled with lush notes of sherry, apricots and rye toast, and leads to an oily finish complete with hints of cured ham, dates and fresh melons.