Be the first to review this product
With all the delicious creaminess, vanilla, and whiskey notes of the original, this limited-edition expression brings additional apple and cinnamon notes to the table. This results in a luscious and rich autumn liqueur.
$39.99
Add to Wish List

Baileys Irish Cream liqueur is the original Irish cream and nothing short of legendary. The iconic drink was originally created by Thomas Edwin Jago ― who is also credited for creating Malibu and Johnnie Walker Blue Label ― for W&A Gilbey in 1974. With his team, he concocted the brilliant idea of combining two Irish treasures ― whiskey and dairy cream. After 2 years of experimentation, they finally came up with the recipe that included some of the finest spirits, chocolate, and vanilla flavors. The recipe endures today under Diageo's ownership.

The quality ingredients play a crucial role in Baileys. 200 million liters of fresh Irish milk that mostly comes from small, family-owned farms are used each year in the production of the cream that ends up in Baileys. The cream is then homogenized with whiskey from several distilleries, employing a process that prevents the liquids from separating. Several other secret ingredients, herbs, and sugar are a part of the recipe which includes their proprietary cocoa extract.

Baileys Apple Pie Irish Cream Liqueur is a limited-edition release that celebrates Friendsgiving, spending quality time with friends during the Thanksgiving season. It has all the vanilla creaminess of Baileys Original Irish Cream Liqueur with the addition of apple and cinnamon notes that amount to a taste, reminiscent of apple pie a la mode. You can enjoy the 34-proof liqueur over ice, in chai tea, or over ice cream.

Grab your bottle of this limited-edition Baileys today!

The apple and cinnamon aromas are immediately apparent on the nose with a touch of whiskey. The palate is creamy with apple pie and vanilla ice cream with cinnamon and spices, culminating in a creamy finish with plenty of vanilla. 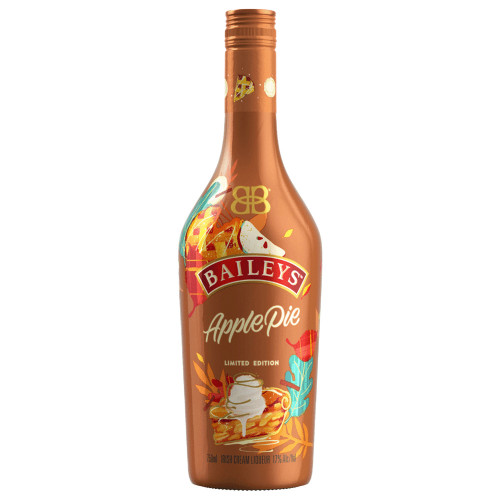