Be the first to review this product
Aged for four to six years and finished in port casks, this bourbon earned a score of 98 points from Wine Enthusiast and was named "the world's finest bourbon" by The Bourbon Review.
Add to Wish List
Notify me when this product is back in stock.

After graduating college, Henderson joined Brown-Forman as a grain chemist and was eventually promoted to Master Distiller. During his 40-year tenure at Brown-Forman, Henderson honed his skills while developing new brands such as Woodford Reserve Bourbon, Jack Daniel Distillery "Gentleman Jack"and Jack Daniel Distillery Single Barrel Whiskey. In addition to being responsible for the development of new products, Henderson oversaw quality control, technical distillery supervision and sensory evaluation. "I never regretted a day when I had to go to work," says Henderson, who was awarded Malt Advocate's Lifetime Achievement Award and was an inaugural member of the Kentucky Bourbon Hall of Fame.

After retiring from Brown-Forman, Henderson decided to go rogue and launched Angel's Envy Bourbon. "Angel's Envy is a lot of things," says Henderson. "It's my life's work. It's a whiskey of incomparable smoothness. It takes into account over 200 years of bourbon heritage and mingles it with over 400 years of port wine heritage." The name is derived from the term "angel's share"- the portion of whiskey that evaporates as it ages in wooden barrels. After tasting the bourbon, Henderson realized that the angel's might want a larger cut.

Angel’s Envy is an exceptional Kentucky straight bourbon finished in port wine barrels. Given the Highest Recommendation by Spirit Journal, celebrated by Whisky Advocate, The Bourbon Review, and awarded Wine Enthusiast’s highest bourbon rating, Angel’s Envy is unlike any other whiskey you’ve ever tasted.


Pick up a bottle of bourbon from one of the most respected master distillers in the industry!

Notes of sweet caramel, raisins and toffee that fade into notes of cinnamon and a touch of vanilla. The long finish has hints of dark chocolate and caramelized fruit, with just a touch of cherry. 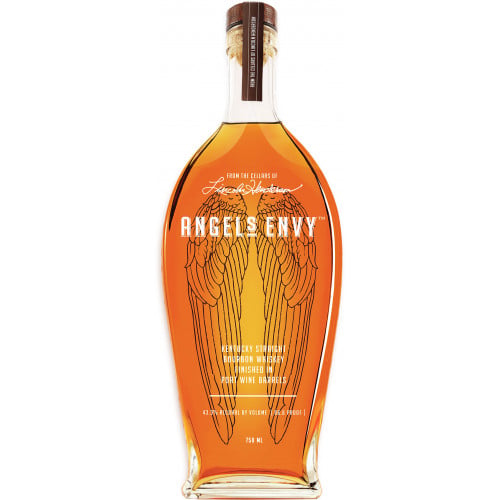