Learn more
*Please note that the ABV of this bottle may vary
Amrut Greedy Angels is the oldest Amrut whisky ever bottled. This release is dedicated to celebrate the 60th Birthday of Amrut Chairman Mr. Neel Jagdale. It was awarded 96 Points by Jim Murray's Whisky Bible!
Notify me when this product is back in stock. 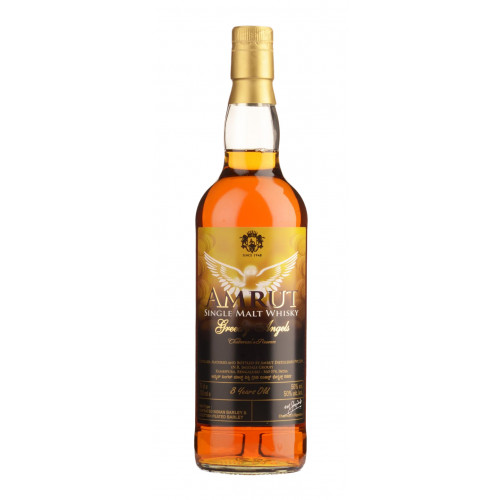 Amrut Single Malt Whisky is made from Indian barley grown at the foothills of the Himalayan mountains in a region known as Punjab (Punjab means "the land of five rivers"). The Himalayan mountain water, along with the cold winters and fiery summers, resulting in a unique type of barley that is rich in nutrients and flavor. After local Indian farmers harvest the barley, it is carefully mashed and distilled in small batches to preserve the natural aroma of the Indian terroir. The whisky is then aged at an altitude of 3,000 feet above sea level in oak barrels that are laid to rest for a minimum of 4 years.

This ‘greedy’ single malt gets its name from India's 'greedy angels' that get a great portion of whisky due to evaporation. As a result, Amrut whiskies are rarely aged for longer than 4 years, making this release incredibly unique. In celebration of the 60th Birthday of Amrut Chairman Mr. Neel Jagdale, this is the oldest release Amrut ever bottled aged for 8 entire years. Nearly 274 liters of spirit was lost in production, and the result is a truly special Indian whisky, far beyond its years, with notes of tropical fruits, and subtle spice.

Tropical fruits such as Pineapple, red liquorice and Hickory on the nose. On the palate are notes of pineapple, mango, bursting orangey citrus and spices. The Finnish is medium to long with a sweet finish.