Be the first to review this product
A Caskers exclusive. This bottle comes from a single cask of WhistlePig award-winning 10YO Straight Rye, chosen by our team, exclusively for Caskers members. Only 132 bottles to spare!
Add to Wish List
Notify me when this product is back in stock.

After he graduated from West Point with a Bachelor's degree in Chemistry, Pickerell served in the military for eleven years as a cavalry officer. Later he received a Master's degree in Chemical Engineering from the University of Louisville, before serving as chairman of the Kentucky Distillers Association and master distiller at Maker's Mark in Loretto, Kentucky for 13 years. “This is what I was meant for,” says Pickerell of the whiskey business.

After leaving Maker's Mark, Pickerell embarked on a journey to find the perfect rye whiskey. “Rye, in its own essence, is just a brilliant grain,” says Pickerell. “I wanted to do rye because it's America's historical whiskey.” During the Revolutionary War, English blockades of American ports prevented the colonists from purchasing molasses used to make rum. As a result, American distillers, including George Washington, started making rye whiskey.

During his hunt for the perfect rye, Pickerell came to two conclusions: first, “to be perfect rye it has to be 100% rye,” and second, “it needs to be somewhere between 9 and 11 years old.” After scouring distilleries and rick houses across the continent for over a year, Pickerell found the perfect source for an aged rye whiskey in Canada.

WhistlePig Straight Rye Whiskey is one of the few 100% rye whiskies available today. “Rye is the brat of whiskey grains. The higher the percent rye you get, the worse it behaves,” says Pickerell. “It gets sticky. It foams. A lot of my colleagues laugh at me for persisting to work with 100% rye because the nuisance level of going from 95% to 100% is unbelievable. Most people stop at 95%. We go ahead and push the envelope and make it 100%.”

After the rye is fermented and distilled, it is aged for ten years — first in new American oak casks and then in second-use bourbon casks. This decade of maturation rounds out the flavors of the rye, and gives it just a hint of sweetness.

For this special, exclusive bottle of WhistlePig Straight Rye Whiskey available only at Caskers, we teamed up with the folks at WhistlePig Farms to bottle an especially amazing cask of ten-year-old rye. Aged in bourbon barrels and bottled at cask strength (119.7 proof), this is a whiskey you won’t want to miss! Aromas of roasted seeds, vanilla and white peaches lead to a palate filled with cinnamon toast, spicy peppers, vanilla and cherries. A delicate yet spicy finish warms the throat and includes subtle textures of leather and cedar wood.

WhistlePig Rye has already received a number of accolades: it received a perfect five out of five stars from F. Paul Pacault's Spirit Journal, it earned a score of 96 points from Wine Enthusiast (the highest score a rye whiskey has ever scored), Details Magazine called it “America's Best New Whiskey” and it was named among the top five whiskeys of the year by The Wall Street Journal.

This batch of whiskey is a Caskers exclusive, a unique single cask of WhistlePig’s 10YO Straight Rye that was chosen by the Caskers team, sourced exclusively for Caskers Members. This rye was born in Canada and raised in Vermont, spending the first part of its life in Char 3 new American oak barrels in Canada before being shipped to Vermont. Some of the whiskey spends as long as seven years at the farm. This single barrel rye is a limited release, only 132 bottles available!

Pick up a bottle of this exclusive Caskers rye bottling today!

Aromas of roasted seeds, vanilla and white peaches lead to a palate filled with cinnamon toast, spicy peppers, vanilla and cherries. A delicate yet spicy finish warms the throat and includes subtle textures of leather and cedar wood. 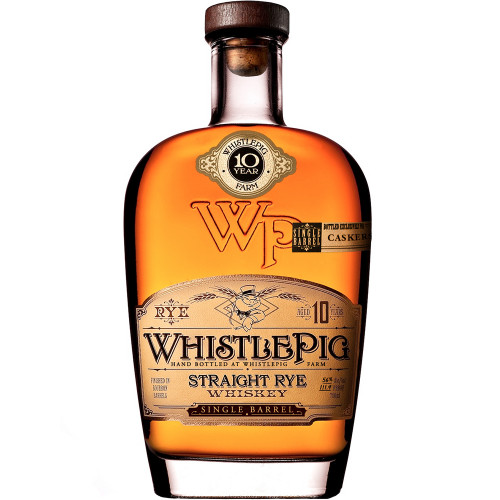