This product is available in: CA, IL, NY, WA Unfortunately, we can't ship to PO Boxes and APO addresses.

This product is available in: CA, IL, NY, WA Unfortunately, we can't ship to PO Boxes and APO addresses. 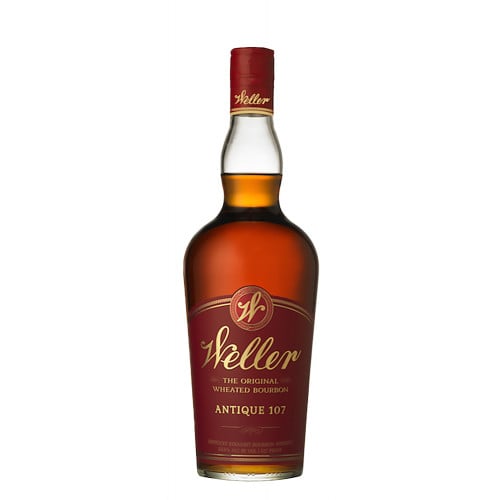 About Old Weller Antique 107 Original Wheated Straight Bourbon
Situated on the Kentucky River in Frankfort, Kentucky, Buffalo Trace Distillery takes its name from an ancient pathway that migrating buffalo used when traveling westward. The trail was well-known among Native Americans and was eventually used by pioneering settlers who crossed the Ohio River and followed the buffalo trace to the Western frontier.

After serving in the Louisville Brigade during the Mexican-American war, William Larue Weller returned home to his native Kentucky. His family had helped settle Kentucky in the late 18th century, and his grandfather, Daniel Weller, purchased a distillery in Nelson County in 1800. Weller had a sharp palate and a keen sense for business and in 1849, he introduced the first bourbon ever that used wheat as its secondary grain instead of rye. Wheated bourbons (including the legendary Pappy Van Winkle and Larceny Bourbon, which eventually imitated W.L. Weller's mash bill) have a softer and more gentle flavor profile as compared to bourbons that use rye as their secondary grain and have a slightly sweeter taste. Weller's bourbon was incredibly popular in antebellum America and ultimately forced him to place a green thumbprint on his invoices and barrels as a certificate of authenticity.

Crafted at the Buffalo Trace Distillery as part of the W. L Weller Antique Collection, Old Weller Antique Kentucky Straight Bourbon Whiskey is a wheated bourbon that, after maturing for seven years, is bottled at cask strength of 107 proof. It showcases a medium-amber hue, with an aroma of creamy vanilla and roasted nuts. Full-bodied and balanced, the bourbon offers notes of honeyed fruits, vanilla, and caramel that lead to a long and slightly spicy finish, and was called a "very well-crafted whiskey" by Wine Enthusiast.

It has a medium-amber hue, with an aroma of creamy vanilla and roasted nuts. Full-bodied, the bourbon has notes of honeyed fruits, vanilla and caramel that lead to a long and slightly spicy finish.

3.8 out of 5
(5 reviews)
Write a review
Real email address is required to social networks
Sign in
Login with Google
Login with Facebook
Or
We also recommend