We're showing you items that ship to MD.

Size750mL Proof86 (43% ABV)
This rich, intense whisky from The Macallan takes its name after the distillery’s six pillars and is part of The Macallan Master Decanter Series.
Notify me when this product is back in stock. 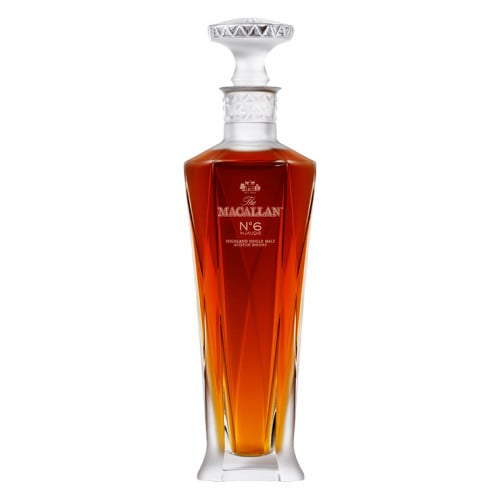 About The Macallan No.6 The Masters Decanter Series Single Malt Scotch Whisky

The Macallan No. 6 delivers classic Macallan character, starting with the beautiful dark walnut color, complex aroma, and deep flavors of spice, dried fruit, and orange groves, imparted by first fill sherry seasoned oak casks from Spain. The casks are crafted by master craftsmen from Jerez de la Frontera, the home of sherry. The casks come from a single cooperage to ensure the highest quality for this rich single malt. Bringing together the mastery of The Macallan and the craftsmanship Lalique, this piece of timeless elegance comes in the beautiful Lalique crystal decanter that was designed exclusively for The Macallan.

Intense, fruity aroma, with notes of raisins, figs and dates. The palate is filled with rich oak, as well as early notes such as leather and tobacco. The finish is at once subtle and astounding, with a dry, nutty character accented by toffee and cream.