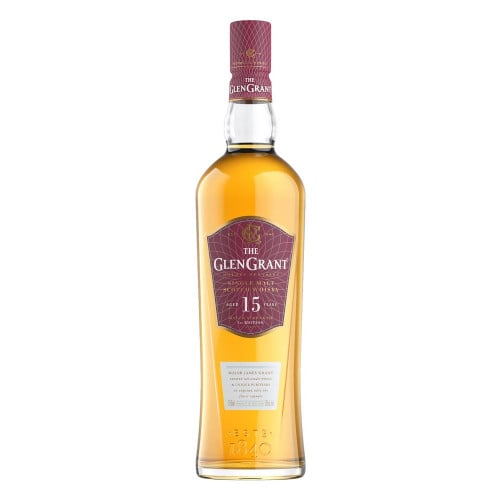 Made by the longest serving Master Distiller in Scotland, Dennis Malcolm, Glen Grant 15 Year Old Single Malt Scotch Whisky was aged for long 15 years in hand-selected first-fill ex-bourbon American oak casks. Bottled without the use of any artificial coloring at a higher proof of 100, this is a signature Glen Grant expression that greets with milk chocolate and malt on the nose and brown sugar, spiced pear, and apricot jam on the palate. Non chill-filtered, it finishes off smooth and gentle with notes of soft fruit, walnut biscuit, malt, and honey.

Glen Grant 15 Year Old Single Malt has a golden honey color, along with an aroma of sweet malt, vanilla, whipped cream and toffee. Notes of orange zest and citrus dominate the palate, and are balanced by a touch of cloves, oak spices and ginger. The finish is long and smooth, with a hint of creamy butter.

Situated along the banks of the River Spey, the Glen Grant Distillery was founded in 1840 by John and James Grant, who had previously been employed at the Aberlour Distillery. Glen Grant's unique location — it enjoyed access to fresh water from the river, a steady supply of barley from the surrounding farmland and access to transportation from the nearby port of Garmouth — allowed it proposer quickly. By 1872, however, both John and James Grant had passed away, and James Grant Jr. — James' son and John's nephew — inherited the distillery. The younger Grant, known simply as "the Major," quickly proved himself a worthy successor.

Pale gold color. The nose greets with citrus fruit, vanilla, milk chocolate, malt, and toffee. The palate is big and bold with flavors of brown sugar, spiced pears, dried apricots, malt, and vanilla. The finish is delicate and smooth with notes of soft fruit, walnut biscuit, malt, and honey.