Size750mL Proof95.6 (47.8% ABV)
Aged for a minimum of 15 years in a single sherry cask, this single malt is the newest release in Balvenie's single barrel range. 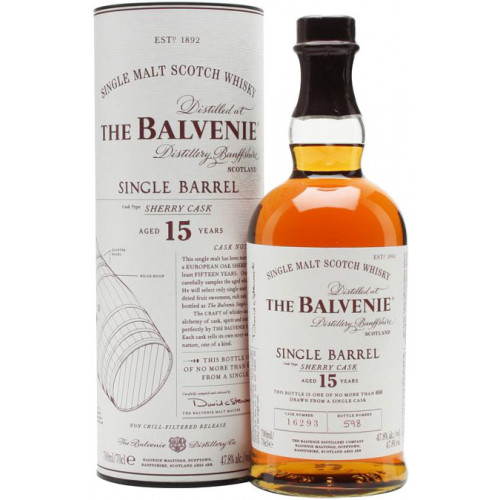 Following distillation, The Balvenie 15 Year Old Single Barrel Single Malt Scotch Whisky Sherry Cask is matured for a minimum of 15 years exclusively in a single European oak sherry butt. The 15-year maturation in a cask that has previously held Oloroso sherry creates a single malt characterized by dried fruit richness, nuttiness and spice. No more than 800 hand-numbered bottles are drawn from each sherry butt and each bottle carries the number of the cask in which it was matured. "Due to the variances of a natural product such as wood, no two oak casks, even of the same type and filled with spirit from the same distillation, will produce an identical single malt," says Balvenie Malt Master David Stewart. "The fact that each cask is unique in this way and that the contents of each cask will taste different is a lesser-known facet of the whisky-making process, but it's a magical one."