Size750mL Proof80 (40% ABV)
Distilled twice through copper pot stills, these tequilas pay homage to Mexico's rebellious spirit. This is a high-end yet extremely popular tequila that’s adored by tequila aficionados all over the world.
Notify me when this product is back in stock. 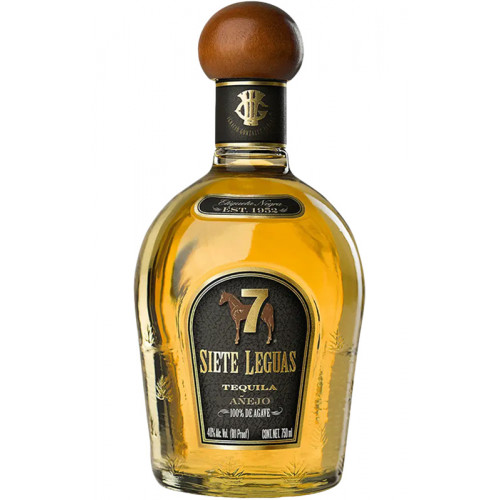 Aged for 18 months in American oak, Tequila 7 Leguas Añejo Tequila is a premium tequila, made with traditional methods. Boasting a beautiful luminous yellow hue and greeting with a subtle nose of vanilla and oaky tones, the body is full and rich with flavors of dried fruit, oak, and orange. This is a high-end yet extremely popular tequila that’s adored by tequila aficionados all over the world.

As the Mexican Revolutionary War began in 1910, José Doroteo Arango Arámbula — commonly referred to as Pancho Villa — joined the pro-democracy forces of Francisco Madero, and eventually rose through the ranks to become one of the country's most prominent generals. 7 Leguas Tequila is named after his favorite horse who was called 7 Leguas (Seven Leagues).

Don Ignacio Gonzales Vargas pays tribute to the Mexican hero with Tequila 7 Leguas. Casa Siete Leguas famously operates two distilleries on the hill in the Highland town of Atotonilco el Alto in Jalisco, Mexico. It’s located near the Rio Taretan but it sources its water from a nearby spring. The first distillery, Fabrica El Centenario, was opened in 1952 and today, it’s a museum-like distillery with three brick ovens and a tahona wheel, dragged by mules. Only wild yeasts are used in the production of their premium tequila. The spirit is distilled in three copper stills during the first distillation and another two are used during the second distillation. The second distillery, Fabrica La Vencendora, is more modern. Built in 1984, it holds five brick ovens, a modern mill, and five copper pot stills. Casa Siete Leguas makes authentic, traditional tequilas mostly from their estate-grown agave. The Men’s Journal named 7 Leguas one of “The 18 Best Tequilas in the World.”

Get your bottle today, tequila aficionado!

Boasting a beautiful luminous yellow hue and greeting with a subtle nose of vanilla and oaky tones, the body is full and rich with flavors of dried fruit, oak, and orange. The finish is smooth and flavorful.