Size750mL Proof80 (40% ABV)
Artisanally produced on the Orkney mainland, Skiren is an unpeated single malt Scotch that showcases the distillery's fruity and creamy style. It's distilled using a pot still and a barrel-shaped Lomond wash-still ― the last remaining of its kind ― and matured in first-fill American oak.
Notify me when this product is back in stock. 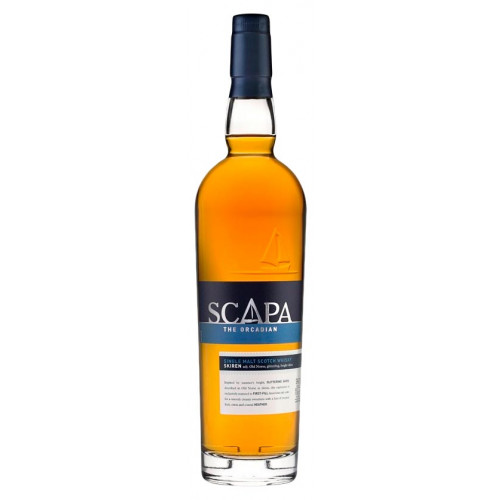 Situated on The Mainland of Orkney, Scapa is a Scotch distillery with its roots going back to 1885 when it was founded by Macfarlane & Townsend. The distillery was acquired by Hiram Walker & Sons in the 1950s, which eventually became a part of Pernod Ricard, along with the Scapa distillery. The distillery faced uncertain times between 1994 and 2004 when it was finally decided that the building would be restored and whisky production would restart after a dry decade.

Today the Scapa distillery is one of the last remaining manually-operated distilleries, operated by a small crew and running 24 hours a day. Master Distiller Brian "The Captain" MacAulay oversees the production of their artisanal single malt whisky, channeling the rich distilling experience of his father and grandfather. They dry their malt without peat, ensuring that the sweet and tropical flavors of their spirit get to shine.

They get their water from the Orquil Springs and all the whisky gets distilled using a single pair of stills: they are particularly proud of the barrel-shaped Lomond wash-still ― the last remaining of its kind when it comes to whisky-making and a crucial part of the whisky's fruity profile. The maturation takes place in first-fill American oak casks that are brought in from Tennessee and Kentucky, prized for the vanilla notes they add to the spirit.

Scapa The Orcadian Skiren showcases the smooth and creamy whisky style with tropical fruit, citrus, and heather notes. It is matured exclusively in first-fill American oak barrels that are meticulously selected by the team at Scapa, then bottled at 80 proof.

The nose is floral with pear, pineapple, and citrus aromas. It's smooth on the palate with a pleasant sweetness, honeydew melon, pear, and lemon sherbet. The finish is long and fresh with a lingering sweetness.