Rating:
87%
(1)
This single-cask expression comes from a single barrel that was picked out by Caskers. Matured in heavily charred casks under the intense Kentucky sun, this bourbon is made by a master distiller with over 50 years of distilling experience.
Add to Wish List
Notify me when this product is back in stock.

At the end of the American Civil War, the Ripy Brothers returned to their native state of Kentucky and opened a distillery on the slopes of Wild Turkey Hill in Lawrenceburg. Although the distillery was forced to close its doors during Prohibition, it reopened shortly thereafter and since 1954, has operated under the tutelage of Master Distiller Jimmy Russell. One of the perks that come with his six decades of service to the same distillery is the freedom to create a product that perfectly captures Russell's vision of what bourbon should be: Russell's Reserve Small Batch Single Barrel Bourbon is the remarkable result of that vision.

Russell's Reserve Small Batch Single Barrel Bourbon is made in Kentucky using a generations-old mash recipe. After the grains are harvested, they are mashed and fermented before being distilled to a lower proof than at other distilleries in Kentucky (meaning that less water is used in diluting the bourbon after it is matured).

Following maturation, Master Distiller Jimmy Russell, along with his son Eddie Russell, hand-select the best barrels for bottling. As a result of being the product of a single cask, rather than a blend of casks, each bottle of Russell's Reserve Single Barrel Bourbon has its own unique characteristics, while still maintaining the rich and creamy style that is endowed by years of maturation in the Kentucky heat.

Once the casks have been hand-selected, the bourbon is non-chill filtered, which preserves the fatty acids and esters in the bourbon while removing any remaining sediment (while the fatty acids and esters may cause a slight cloudiness in the bourbon, they contribute to its overall natural taste and provide for additional complexity). Each bottle is then filled from a single cask before being labeled by hand. Bottled at 110 proof, this Russell's Reserve Caskers Private Barrell Selection features a single-cask juice where the cask in question (19-1502) was picked out by Caskers. The liquid within was distilled in 2009, aged on the 6th floor of warehouse CN F, then bottled in November 2019.

Grab one of these exclusive bottles today!

The aroma is surprisingly subtle. Notes of cinnamon, oak, and spicy wood are nicely balanced with undertones of vanilla, crème brûlée, and honey, and ultimately lead to a deep and rich finish. 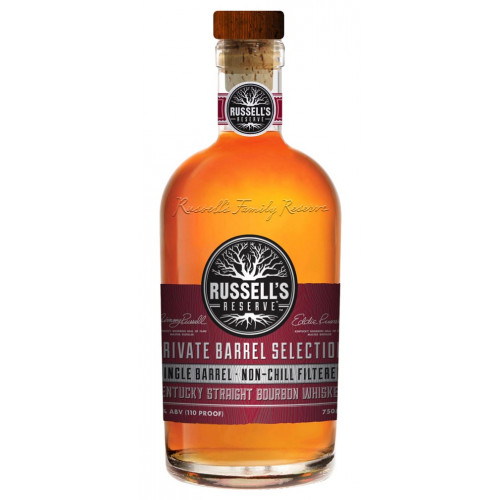