This product is available in: DC, NH, NJ, NY Unfortunately, we can't ship to PO Boxes and APO addresses.

Size750mL Proof92 (46% ABV)
As their own distillate matures, the revived J. Rieger & Co teamed up with legendary Dave Pickerell for the creation of this expression. Crafted with sourced American straight bourbon, light corn, and straight rye whiskeys aged at least 4 years, the whiskey has a little bit of 15-year-old Oloroso sherry added.

This product is available in: DC, NH, NJ, NY Unfortunately, we can't ship to PO Boxes and APO addresses. 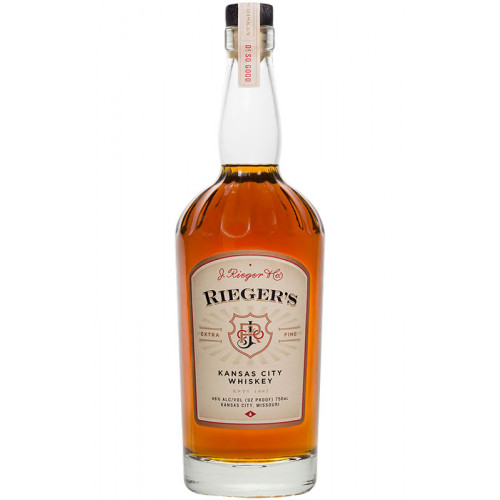 Soon after, Head Distiller Nathan Perry joined the team, studying under the mentorship of Pickerell. Their 750-gallon copper Vendome still came online in 2015 and their lineup started expanding with a wheat vodka, gin, and amaro. Today, they distill 1,200 barrels of rye and bourbon each year and the first 5-year-old whiskeys came of age in 2021. J. Rieger & Co. is the first legal Kansas City distillery since Prohibition.

Rieger's Kansas City Whiskey was the first release of the freshly-revived brand. It pays tribute to the practice of "rectifying" whiskey that was widespread in the late 1800s. The process involved adding sherry, prune juice, or other additives to a young whiskey in order to improve its taste and reduce harshness due to the whiskey being under-aged. This expression is a blend of sourced American straight bourbon, light corn, and straight rye whiskeys aged at least 4 years with the addition of 15-year-old Oloroso sherry from the Williams & Humbert Bodega in Jerez, Spain. The unique whiskey is bottled at 92 proof.

Get your bottle of this sherried whiskey today!

This well-balanced whiskey opens with aromas of berries, caramel, and baking spices. The palate is sweet with caramel, honey, oak, and a touch of spice, culminating in a bittersweet and fruity finish.