Be the first to review this product
Crafted with a mash bill of 60% corn, 36% rye and 4% malted barley, this Single Barrel High Rye Bourbon is a Caskers exclusive. The finest barrels of this whiskey get selected by Master Blender Dave Carpenter. This one was bottled at 105 proof.
Add to Wish List
Notify me when this product is back in stock.

Redemption harkens back to the 17th and 18th century, a time when rye was the dominant spirit in America. After the Prohibition forced countless distilleries to close their doors, bootleggers began distilling gin instead of rye, and for good reason — gin didn't require aging under the watchful eye of a master distiller and its true flavors could be hidden behind a mask of botanicals. As Americans grew accustomed to gin, rye whiskey became an anachronism.

Today all that is changing and rye is having a proper renaissance. Redemption has made it their sole purpose to return rye whiskey back to its rightful place. They produce award-winning whiskeys in small batches, putting a modern twist on decades-old traditions. Redemption Whiskeys are meticulously hand-crafted in the river town of Lawrenceburg, Indiana at Whisky Advocate’s 2015 Distiller of the Year: the 172-year-old MGP Distillery.

Redemption High-Rye Bourbon Single Barrel Select is made from a mash of 60% corn, 36% rye, and 4% malted barley, leading to a bourbon that is dangerously close to rye whiskey. After distillation, it is aged for 2.5 years on average in new, charred American oak casks before being brought to proof and bottled by hand. The Single Barrel program features the best barrels, selected by Master Blender Dave Carpenter. This one is a Caskers exclusive and is bottled at a higher 105 proof.

It's a big and bold profile with plenty of rye spice, caramel, honey, corn, apple, and plenty of vanilla notes. There's a pleasant sweetness as well as nutty notes. 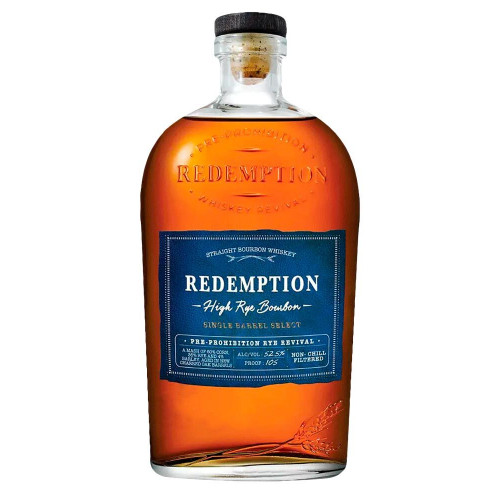