Be the first to review this product
This exceptionally old bourbon honors one of the whiskey industry's founding fathers and showcases the perfect balance between bitter, sweet, savory, and sour. A true delicacy.
$5,100.00
Add to Wish List

Extremely sough-after among collectors, Van Winkle Bourbons honor one of the whiskey industry's founding fathers. In this exclusive range, Pappy Van Winkle's Family Reserve 20 Year Old Bourbon Whiskey stands out even further as it is exceptionally old for a bourbon – no other bourbon can stand 20 years of aging. This stunning bourbon, however, has enough character to not only withstand it but to reemerge spectacularly better on the other side. A very special whiskey, it's one of the most unique and stunning bourbons ever made.

A dark amber and dark orange hue. The nose greets with raisins, maple, cherry, vanilla, and oak aromas. Full-bodied and rich, expect flavors of oiled leather, minerals, smoke, coffee, and cigar boxes on the palate. The finish is seemingly endless. 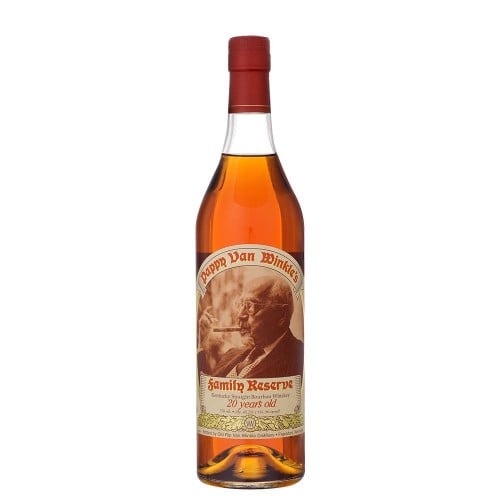