Be the first to review this product
This whiskey was named Irish Whiskey of the Year by Whisky Advocate in December 2014.
$343.99
Add to Wish List

In the early 19th century, a series of buildings in southeast Ireland that were being used to mill wool were sold to the Irish government for £1,250. Within two decades, the government sold the buildings to Lord Midleton, who set about to convert the mill into a distillery. Today, Midleton Distillery marries together time-honored, traditional distillation techniques with modern equipment to produce some of the finest whiskey in all of Ireland.

Midleton Very Rare Irish Whiskey represents an annual bottling of the most exceptional casks of whiskey maturing at Midleton Distillery. The label was introduced in 1984, when Midleton Master Distiller Barry Crockett hand-selected a few dozen casks of whiskey from the distillery's rickhouses and blended them together. As a guarantee of quality and authenticity, Crockett personally signed each bottle by hand. Since then, the distillery has released a new vintage of Midleton Very Rare Irish Whiskey each year.

Midleton Very Rare Irish Whiskey is a marriage of fewer than 100 casks of whiskey, each of which was personally selected by Brian Nation (Crockett's successor) out of the nearly one million casks of whiskey currently maturing at the distillery. The whiskey — triple-distilled and aged in lightly charred, ex-bourbon barrels for up to 25 years — has an aroma of subtle honey, sandalwood and dried apricots. The aroma gives way to notes of creamy vanilla, butterscotch and summer fruits (particularly strawberries and peaches) on the palate, and ultimately leads to a long and slightly sweet finish with a touch of cinnamon.

Midleton Very Rare Irish Whiskey earned the Double Gold Medal at the San Francisco World Spirits Competition, and earned a score of 96-100 points from Wine Enthusiast. In addition, it was named the Irish Whiskey of the Year by Whisky Advocate in December 2014. 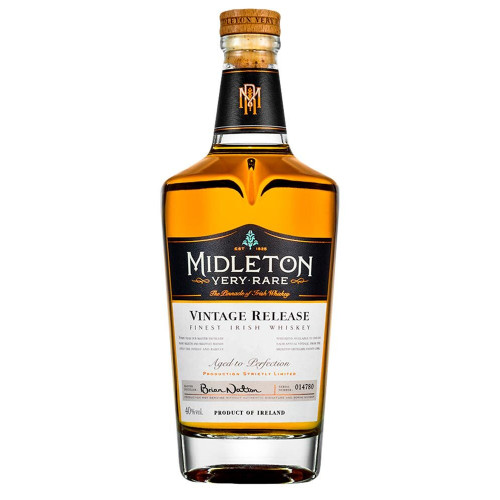