Size750mL Proof115.8 (57.9% ABV)
Aged for over a decade and bottled at cask strength, this whisky was awarded the title "Best Single Malt Whisky in the World" by Whisky Magazine. 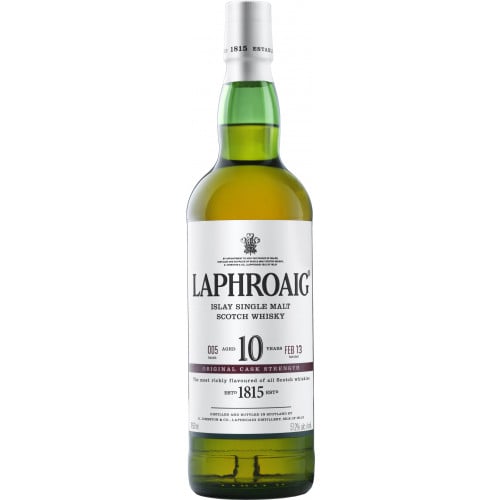 Laphroaig Single Malt Whisky is one of the most flavorful and intense whiskies made anywhere in the world. During Prohibition, it was one of the few whiskies still legally imported into the United States, as it was considered a medicinal spirit. Laphroaig Single Malt is made from the finest Scottish barley, which is malted at the distillery and smoked over a peat flame. Unlike other distilleries which source peat from the Scottish mainland, the peat used to smoke Laphroaig barley is made from the heather, mosses and lichens of Islay and adds a distinct iodine-like flavor to the whisky.

Golden honey hue. Aroma of smoke and seaweed with a hint of vanilla. Initial flavors are robust and intense, with notes of peat and smoke and subtle undertones of nutty dough, tang, vanilla and honey. Full body which leads to a lingering finish.