Learn more
Size750mL Proof92 (46% ABV) *Please note that the ABV of this bottle may vary
Nick Offerman, most famous for playing Ron Swanson on the sitcom Parks and Rec, creates a 11YO Lagavulin Single Malt, aged in Guinness casks, to honor his dad for Father's Day 2021.
Notify me when this product is back in stock. 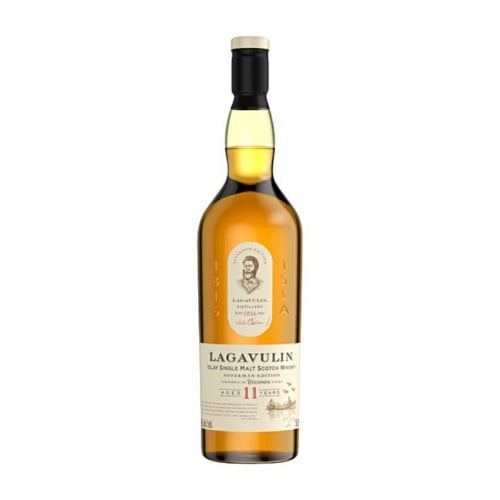 Perhaps most famous for his role as Ron Swanson on NBC's sitcom Parks and Recreation, actor Nick Offerman is one of many Lagavulin enthusiasts in the world and an avid fan of Guinness. This is why he wanted to create a special gift, dedicated to his dad from whom he inherited these passions. For Father's Day 2021, he set on a mission to combine them into the best Father's Day gift and create a new whisky.

After being finished for 4 months in barrels from the Guinness Open Gate Brewery in Baltimore, MD, this unique edition of 11-year-old Lagavulin Single Malt Scotch boasts a palate full of chocolate, vanilla, and chili-pepper flavors as well as a golden-brown hue. Bottled at 92 proof, this is the perfect gift to offer your dad for Father’s Day.

Get the best Father's Day gift!

Golden-brown hue. Complex and rich nose with traces of chocolate and vanilla that develop further on the palate where flavors of chili-pepper join and linger on the finish.

3.9 out of 5
(7 reviews)
Write a review
Real email address is required to social networks
Sign in
Login with Google
Login with Facebook
Or
We also recommend