Be the first to review this product
Infused with pomegranate for a full year, this tequila earned the Silver Medal at the 2009 Spirits of Mexico Tequila Tasting Competition.
Add to Wish List
Notify me when this product is back in stock.

In the highlands of Jalisco, Mexico, expert jimadors are carefully tending to the 100% organic, blue weber agave that are used to create La Pinta Pomegranate Infused Tequila. The agave, which favor the high altitudes and rich sandy soils of Jalisco, thrive under the supervision of the Tequilas Premium's jimadors. After the agave are allowed to mature for a minimum of nine years, the jimadors hand-select and harvest the agave believed to be the most robust and flavorful.

The hearts of the agave, or piñas, are then taken to the distillery — Tequilas Premium — where they are slowly steamed in brick ovens for 72 hours. The steaming process enhances the natural flavors of the piñas, and causes any excess water to evaporate. Once the piñas have been cooked, they are crushed and the remaining pulp is fermented using a proprietary strain of yeast. Following fermentation, the wash is thrice-distilled through a copper alembic still and then brought to proof with water that has undergone a five-step refining process.

As the tequila is being distilled, hand-picked pomegranates — Jalisco is one of Mexico's premier regions for growing the fruit — arrive at the distillery. The pomegranates are washed and placed in wooden vats, where their juice is slowly extracted. After extraction, the fresh juice is then married with the tequila in roughly equal proportions, and the entire concoction is allowed to rest for twelve months in order to ensure that the flavors are fully harmonized. After its year-long slumber, La Pinta Pomegranate Infused Tequila is filtered and bottled.

"La Pinta holds a special place for me," says Arturo Lomeli, master distiller at Tequilas Premium. While the combination of pomegranate juice and tequila has long been a tradition in Jalisco (the mixture is called ponche de granada), the exact recipe varies from town to town and family to family. La Pinta is based on Lomeli's family recipe.

La Pinta has a deep amber hue and a subtle, earthy yet tart aroma. The initial notes of pomegranate are robust and balance out the flavors of agave and pepper in the tequila. The finish is clean and flavorful, with a burst of citrus and spice.

La Pinta Pomegranate Infused Tequila earned the Silver Medal at the 2009 Spirits of Mexico Tequila Tasting Competition. Pick up a bottle today and try it in a cocktail today!

Subtle, earthy yet tart aroma. Initial notes of pomegranate are robust and balance out the flavors of agave and pepper in the tequila. The finish is clean and flavorful, with a burst of citrus and spice. 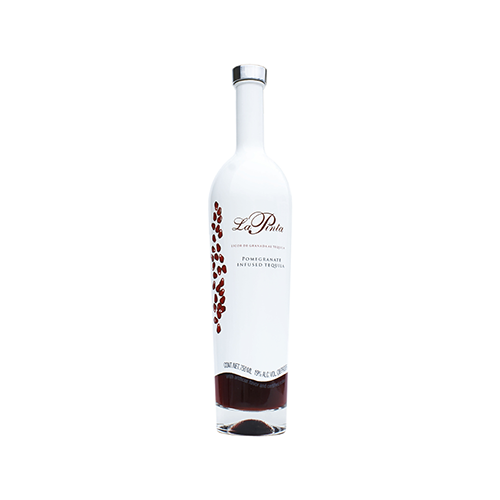