Be the first to review this product
You are familiar with the "angel's share" ― the portion of the whiskey that evaporates during maturation. The "Devil's Cut", as the folks at Jim Beam call it, is the liquid that remains within once the barrels are emptied. They extract this spirit, then blend it with 6YO bourbon, crafting this intensely oaky expression.
$35.99
Add to Wish List

After settling in Kentucky, Beam began harvesting corn and set forth a family tradition by distilling the excess grains he harvested into whiskey. Since then, seven generations of the Beam family have been involved in whiskey production for the eponymous company (the company is actually named after James Beam, who rescued it following Prohibition). Today, Fred Noe — a seventh-generation master distiller and the great-grandson of Colonel James B. Beam — shepherds his family legacy forward.

After the barrels are emptied, a small portion of the liquid remains trapped inside. This "Devil's Cut", as the folks at Jim Beam call it, is extracted using a proprietary process, then blended with 6-year-old Kentucky straight bourbon and bottled at 90 proof, creating Jim Beam Devil's Cut Whiskey. It's an intensely oaky, deep, and complex spirit with an extra layer of richness and robust flavor.

Grab your bottle of this unique whiskey today!

The nose opens with an intense and deep aroma of charred oak and hints of smoke in the background. It's full-bodied, rich, and complex with intense oak, vanilla, and fruit on the pleasantly sweet palate. The finish has lingering oak, spice, and vanilla notes. 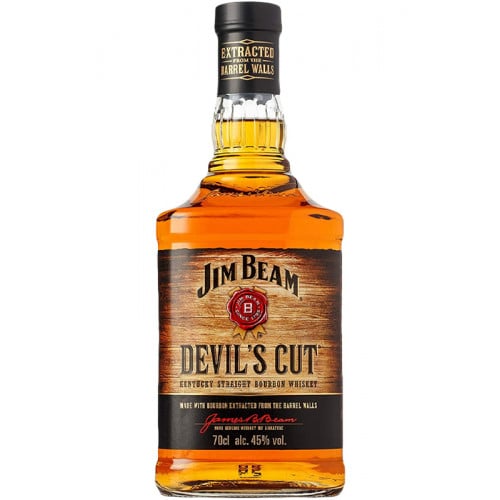