Size750mL Proof96 (48% ABV)
Jefferson's Ocean is a unique series of whiskey that is finished at sea, circling the globe aboard OCEARCH ships. The 26th voyage is a special one, as it marks the first time the voyage was completed by a rye whiskey. While aboard the ship, the whiskey was stored ini both new char and toasted casks. 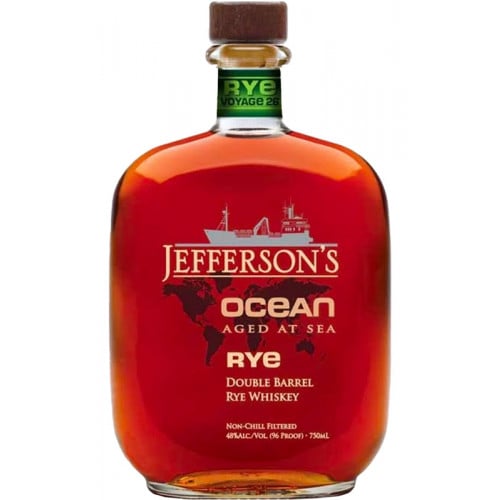 The principal author of the Declaration of Independence and one of the greatest Founding Fathers, Thomas Jefferson was elected the third President of the United States in 1800. During his tenure, Jefferson authorized the purchase of the Louisiana Territory, dispatched Lewis and Clark westward in order to explore the remainder of the continent, and repealed the Whisky Excise Tax.

After Jefferson retired from public office in 1815, he often tended to the garden that he had cultivated at his Monticello estate. At the time, it was customary for wealthy farmers, including Jefferson, to make their own garden spirits. Each farmer's spirits were unique and reflected their personal tastes and the local terroir of their farm. Jefferson's Reserve Whiskey is crafted by Chet and Trey Zoeller in honor of Jefferson and his experimental nature. While the Zoellers were inspired by Jefferson, their roots can be traced back for generations deep into Kentucky's bourbon history.

Founded in 1997 by Trey Zoeller and his father Chet, a famous bourbon historian, Jefferson's Bourbon began as a family affair. Producing spirits was in their blood since as early as 1799, when Trey's 8th generation grandmother was arrested for the production and sales of spirits at a time when it was prohibited by law. More than two centuries later, Trey Zoeller continues to push the boundaries of bourbon with his curious mindset, while upholding this rich tradition.

His taste for experimentation is evident in the Ocean line, for a boat is not a very common place for aging spirits. The idea crossed Trey Zoeller’s mind while he was holding a bottle of Jefferson’s Reserve on the deck of his friend’s boat. As he watched the bourbon rock gently against the glass, he thought to himself how bourbon would age on a ship, subjected to constant movement and extreme weather changes. In 2012, the first barrels began their journey around the world on OCEARCH’s flagship, a non-profit organization studying marine species. The result was a collection of dark bourbons of savory taste, aged beyond their years due to the constant movement and sugars caramelizing in the wood.

Jefferson's Ocean Aged at Sea Double Barrel Rye marks the series' 26th voyage. And it's a special one, as it's the first time a rye whiskey has completed it. The whiskey spent its time at sea in both new char and toasted casks resulting in a balance of toffee, marshmallow, leather, and tobacco notes. The unique maturation at sea results in rich caramel notes with a touch of sea spray. The expression is bottled non-chill-filtered at 96 proof.

Aromas of toasted marshmallow, maple syrup, and spice greet the nose. The palate is bold with toffee, vanilla, tobacco, and hints of leather. Look for prominent baking spices with cinnamon and a touch of sea spray on the satisfyingly long finish.