Rating:
100%
(2)
We hand-picked an exceptional barrel of James E. Pepper's 4-year-old rye whiskey from a lineup of their most prized barrels. It was bottled at 107 proof and is a wonderfully complex and full-bodied limited edition.
Add to Wish List
Notify me when this product is back in stock.

Today the re-launched brand is back in full force. "We did extensive research and spent years collecting and analyzing full, preserved bottles of original Pepper Whiskey," says Amir Peay. They even acquired a letter written by Pepper himself, detailing the exact mash bill and recipe used to create Old 1776. "We wanted to pay homage to Pepper's legacy and do our best to recreate the original Pepper Whiskey — something that was part of American history," he says.

This super-limited bottle comes from the Old Pepper Single Barrel selections of their very favorite barrels of straight whiskey. This particular liquid spent 4 years in its new oak barrel before being selected by Caskers and bottled by hand at 107 proof right there at distillery no. 5 in Lexington. Complex and full-bodied, this rye is a rare chance that shouldn't be missed.

Get one of these strictly-limited bottles today!

It's complex and full-bodied with notes of mint, cloves, eucalyptus, dark chocolate, and honey. Finishes extra smooth and long. 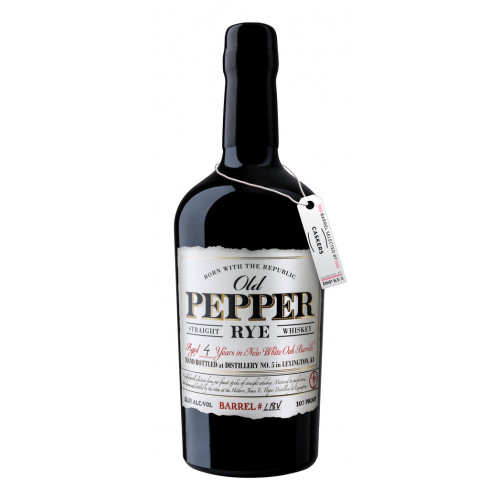