Size750mL Proof80 (40% ABV)
Matured for over two years, this whiskey is made with the first new mashbill used at the Jack Daniel Distillery in over a century. 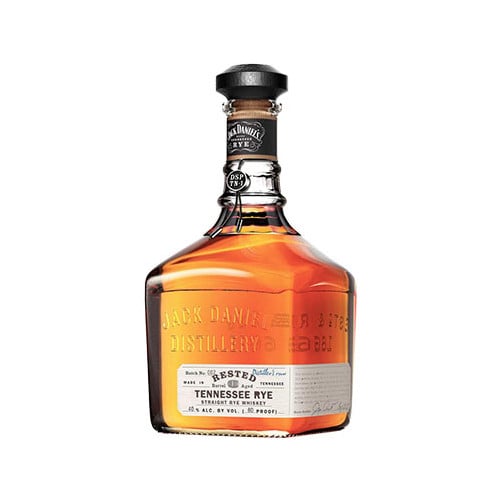 Jack Daniel Distillery Rested Tennessee Rye Whiskey is crafted from a batch of 70% rye, 18% corn and 12% malted barley (this mashbill is the first new mashbill used at the Jack Daniel Distillery Distillery in over a century). Once the ingredients have been mashed, they are fermented with a proprietary strain of yeast and iron-free cave spring water. Following fermentation, the wash is distilled and the resulting whiskey is then filtered through 10 feet of charcoal. This filtering process, known as the Lincoln County Process, earns the whiskey the title of "Tennessee Whiskey"and imparts a signature, sweet yet smoky flavor profile.

Once the whiskey has been charcoal filtered, it is matured for two years in American oak casks. "We felt like we should offer our friends another limited-quantity rye expression that's still handcrafted with the same passion and quality they expect from all of our products," says Jeff Arnett, the master distiller at Jack Daniel Distillery Distillery. "And we hope they'll remember that, as good as this new offering is "“ it's still just a taste of what's to come."

Jack Daniel Distillery Rested Tennessee Rye Whiskey has an aroma of caramel, vanilla, nougat and spicy oak that gives way to bold notes of cherries, citrus and rye on the palate. The finish is dark and inviting, with touches of honey, wood, clove and black pepper.

Aroma of caramel, vanilla, nougat and spicy oak that gives way to bold notes of cherries, citrus and rye on the palate. Finish is dark and inviting, with touches of honey, wood, clove and black pepper.