Size750mL Proof86 (43% ABV)
Glenmorangie Grand Vintage Malt 1997 is the seventh expression in the Bond House No. 1 Collection. This lively and floral Highland single malt whisky was aged for 23 years, initially in ex-Bourbon casks for 10 years, followed by 13 years in rare Bordeaux wine casks. 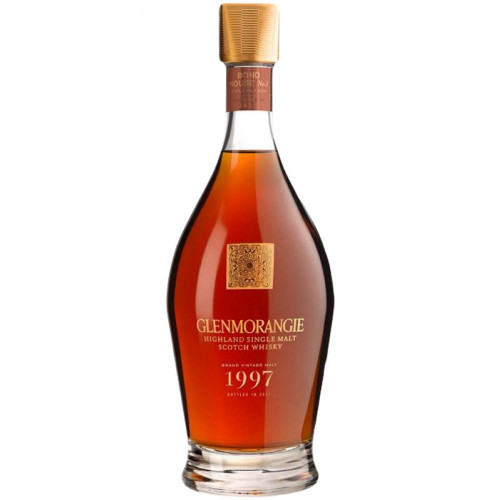 Bond House No. 1 Collection is an award-winning series that was designed to showcase the individuality of Glenmorangie’s most prized vintage malt whiskies. The series is named after the largest of the distillery’s 19th century Bonded Warehouses, which was transformed into a still house in 1990.

Glenmorangie Grand Vintage Malt 1997 is the seventh expression in the Bond House No. 1 Collection. The base of this expression was aged for 23 years, initially in ex-Bourbon casks for 10 years, and then finished for 13 years in rare red wine casks from Château Montrose in Bordeaux, developing extraordinary dark berry fruit flavors. The vintage bottling was rounded off by the combination of whisky matured exclusively in ex-Bourbon casks for Glenmorangie’s hallmark citrus notes, whisky from ex-Oloroso sherry casks to add layers of sweetness and spicy finesse, and some secret casks. This lively and floral expression is bottled at 43% ABV.

The nose is complex, with floral notes of rose, jasmine and carnation intermingling with soft red fruits, mint toffee, pastry or cake mix and a sweet confectionery top note. The palate is slightly tingly and gently spicy, followed by a symphony of sweet candy flavors, more soft red fruits, pineapple chunks and a taste reminiscent of pears and mandarin segments in fruit jelly, together with sweet ginger and chili notes, gentle almond marzipan and vanilla toffee apple. The finish is sweet, rich, long and delicately spicy.