Be the first to review this product
Bottled exclusively for Caskers members, this brandy is composed primarily of Pinot Noir from the 1994, 2004 and 2005 vintages, and required upwards of six tons of grapes to produce.
Add to Wish List
Notify me when this product is back in stock.

Over three decades ago, Ansley Coale picked up a hitchhiker along Route 101 just north of San Francisco. The hitchhiker — Hubert Germain-Robin — was of French origin and came from a family that had been producing cognac since 1782. As the two drove northward in Coale’s car, Hubert spoke of his family’s background in distillation. “Hubert wanted to distill using craft methods handed down for centuries from master to apprentice,” recalls Coale, who eventually teamed up with the hitchhiker to found Craft Distillers. After purchasing an antique cognac still from an abandoned distillery in France, Hubert and Coale built a redwood shed in northern California and began distilling spirits.

Germain Robin Brandy is the product of over two centuries of distilling heritage and experience. We worked with the Craft Distillers team in order to select a private blend of brandy specifically for Caskers members. Our aim was to identify a brandy that would showcase the extraordinary ability of the distillery.

Our private blend of Germain Robin Alambic Brandy Brandy is composed primarily of Pinot Noir from the 1994, 2004 and 2005 vintages (a barrel of brandy distilled from pinot noir requires more than six tons of grapes). In addition, there are touches of French colombard, Viognier, Zinfandel and Chardonnay in the mix. The wines were distilled through Germain-Robin’s antique cognac still. “We distill entirely by hand,” says Coale, adding that he “make the cuts by hand, constantly monitors the distillate coming off the still, adjusts the heat and adjusts the temperature inside the condenser.” After distillation, the brandy was matured in French Limousin oak casks.

As a result of this unique process, our blend of Germain Robin has notes of caramel, dark plums, ripe apples and red fruits on the palate. The flavor profile is complemented by a subtle butterscotch aroma with hints of toffee and caramel apples on the finish.

Notes of caramel, dark plums, ripe apples and red fruits on the palate. Subtle butterscotch aroma with hints of toffee and caramel apples on the finish. 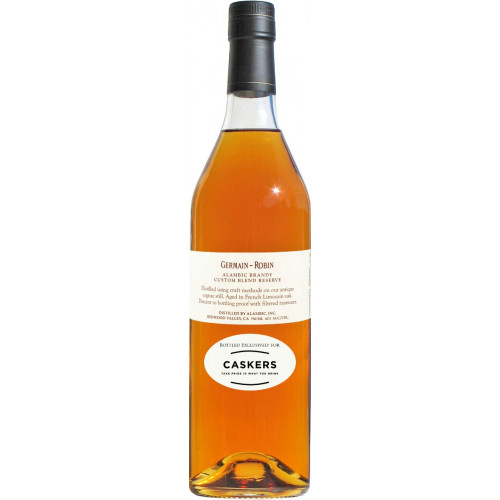 Skip to the beginning of the images gallery
Exclusive
Toggle Nav