Size750mL Proof90 (45% ABV)
Aged for a minimum of four years, this bourbon is made by blending four unique bourbons together. 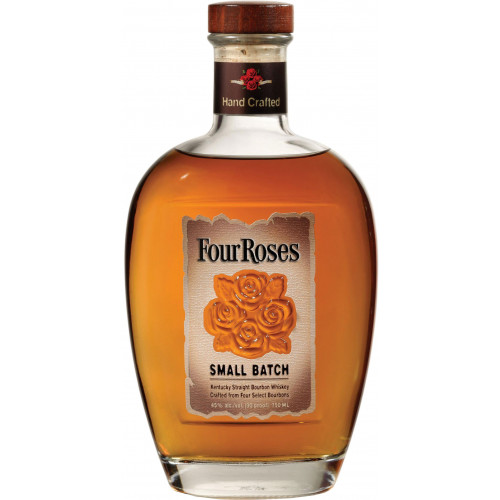 On the banks of the Salt River, nestled in the quiet Kentucky countryside near Lawrenceburg, Four Roses Distillery is a testament to American ingenuity and perseverance. Built in 1910 to resemble the architecture of California wineries, the distillery — now listed on the National Register of Historic Places — was one of six distilleries that was granted permission to operate during Prohibition in order to produce medicinal bourbon.

After distillation, each bourbon is aged for a minimum of four years at a one-story rickhouse maintained near the distillery. While most distilleries age bourbon in warehouses that are many stories high, Four Roses ages its bourbon in a one-story warehouse to ensure that each barrel is aged in a similar environment. After aging, the barrels are hand-selected and then blended together in order to create Four Roses Small Batch Bourbon.

Spicy aroma, with hints of cedar, cloves and cinnamon. Notes of red plums, apples and berries dominate the palate, and are well-balanced by hints of peppercorn and toasted rye. Finish is smooth and soft, and ends with a touch of vanilla.