Size750mL Proof82 (46% ABV)
This extra añejo tequila was aged for six long years in new, American white oak barrels.
Notify me when this product is back in stock. 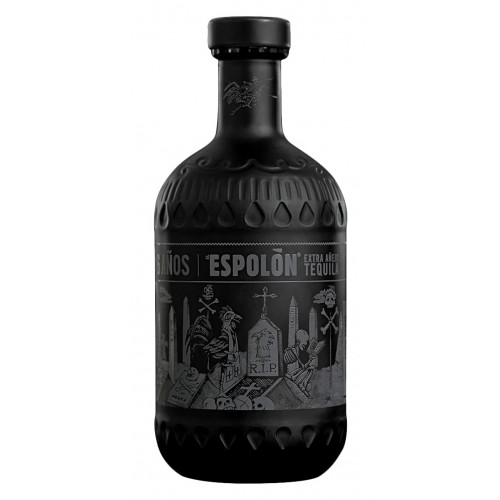 Made exclusively from blue agave harvested from the Highlands region of Mexico, Espolòn Tequila is crafted at the San Nicolas Distillery by Master Distiller Cirilo Oropeza. The distillery is located among the agave plantations of Jalisco's rolling hillsides, and has been the site of tequila production for over two centuries.

After distillation, Espolòn Tequila Extra Añejo was laid to rest in new, American white oak barrels, where Master Distiller Cirilo Oropeza kept a watchful eye on his tequila (and waited patiently). After six long years — twice as long as the legal minimum for “extra añejo” — Oropeza bottled the tequila at 82 proof, giving it an exceptionally rich, smooth flavor.

Espolòn Tequila Extra Añejo has a nose that is both floral and smoky, with roasted agave notes mingling with baking spices, toasted almond, vanilla, ripened pineapple, maple and oak. The palate is buttery and viscous, and leads to a finish accented with cocoa nibs, rich fruits, cherry, tobacco and honey.

There’s only one batch of Espolòn Tequila Extra Añejo, and once it’s gone, it’s gone forever.

Nose that is both floral and smoky, with roasted agave notes mingling with baking spices, toasted almond, vanilla, ripened pineapple, maple and oak. The palate is buttery and viscous, and leads to a finish accented with cocoa nibs, rich fruits, cherry, tobacco and honey.