Be the first to review this product
This exclusive bottle comes from a single barrel that was selected by The Caskers Community. These private barrels are singled out as exceptional among the much-loved and acclaimed Elijah Craig Small Batch Bourbon.
Add to Wish List
Notify me when this product is back in stock.

Elijah Craig Small Batch Kentucky Straight Bourbon Whiskey pays homage to Craig and his unique legacy. The bourbon is bottled from the marriage of fewer than 100 casks of maturing bourbon, each of which is rested in a Kentucky rickhouse for a minimum of a dozen years. The bourbon has an aroma of honey, sweet corn, vanilla, and brown sugar. The aroma gives way to notes of roasted nuts, creamy vanilla, molasses, and tropical fruits on the palate, that are well-balanced by hints of dry oak and cinnamon. The finish is long and sweet, ending with a warming touch.

Get this Caskers-exclusive single-barrel bourbon today!

Complex aromas of honey, sweet corn, vanilla, fruit, and mint are on the notes. Notes of roasted nuts, creamy vanilla, molasses, and tropical fruits are on the palate. These are well-balanced by hints of dry oak, mint, cinnamon, and nutmeg. The finish is long and sweet, ending with a warming touch. 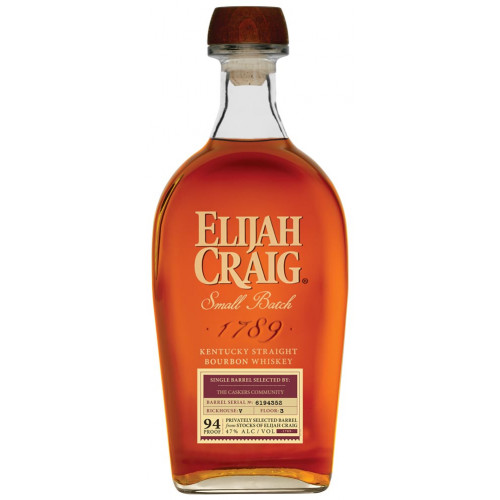