Rating:
87%
(1)
Made from a mash of 80% malted rye and 20% chocolate rye, this rye whiskey is distilled by the 2013 Craft Distillery of the Year.
Add to Wish List
Notify me when this product is back in stock.

"I'm an avid whiskey lover," says Darek Bell, master distiller at Corsair Artisan Distillery in Kentucky, "but I do think whiskey could be better. Different. More interesting. More imaginative." Bell, a graduate of the Bruichladdich Distilling Academy in Islay, Scotland, is a mad-scientist and a notoriously experimental distiller. Since opening its doors in 2009, Corsair Artisan Distillery has received numerous accolades and awards, including being named the 2013 Craft Distillery of the Year and 2013 Innovator of the Year by Whisky Magazine.

Corsair Ryemageddon American Rye Whiskey is distilled from a mash of 80% malted rye grains and 20% chocolate rye grains. After the grains have been harvested by local farmers, they are mashed and fermented before being twice distilled, first through Bell's antique wash still and then again through his 240-gallon copper-pot still. Corsair's small operation has no mechanized components — each step of the distillation process is completed by hand. "We make less in a year than a big distillery spills in a day," says Clay Smith, Corsair's Distillery Manager.

Once the whiskey has been distilled, it is aged in 15 gallon, charred American oak casks for just under one year. Following maturation, each batch of Ryemageddon Whiskey is brought to proof and bottled by hand. "Our products are extremely small batch,"adds Smith, "meaning that our largest run is 550 bottles."

Corsair Ryemageddon American Rye Whiskey has an aroma of milk chocolate and peanut butter, along with notes of fresh rye toast, baking spices and buttered bread on the palate. The flavors lead gently to a warming finish with a touch of fruit, butter and vanilla. The whiskey earned the Gold Medal at the International Review of Spirits, and earned a score of 94 points from the Beverage Testing Institute. Pick up a bottle today!

Aroma of milk chocolate and peanut butter along with hints of dried fruit and caramel. Notes of fresh rye toast, baking spices and buttered bread on the palate. Warming finish with a touch of fruit, butter and vanilla. 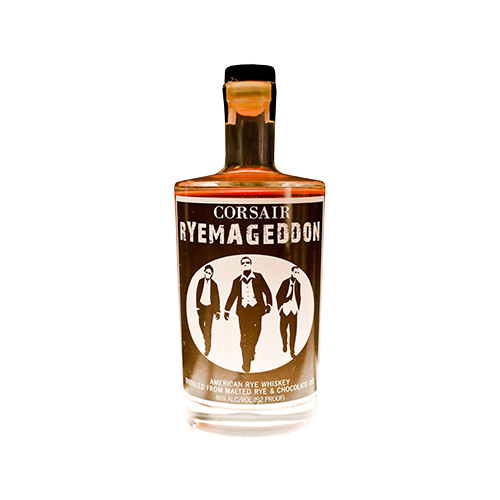