Size750mL Proof80 (40% ABV)
Cincoro Extra Añejo is an award-winning small-batch expression blended from selected tequilas aged in Kentucky bourbon barrels for 40–44 months. This sophisticated tequila comes in an elegant agave leaf-shaped bottle made from hand-polished black crystal with golden details.
Notify me when this product is back in stock. 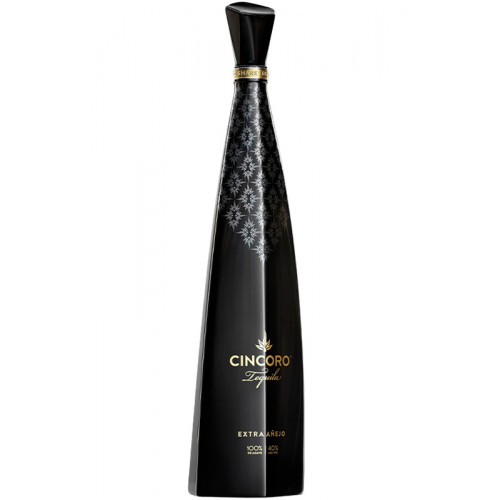 Cincoro is a super-premium tequila brand, created by five NBA owners, Emilia Fazzalari and Wyc Grousbeck of the Celtics, Jeanie Buss of the Lakers, Michael Jordan of the Hornets, and Wes Edens of the Bucks. The five cofounders bonded over their love for tequila at a dinner one summer night in 2016, which led to them establishing Cinco Spirits Group, whose name alludes to the five founding partners. They tasted over 1,000 different expressions before finding the blend that matched their vision of making a smooth and rich tequila with a long and luxurious finish resembling that of a fine cognac.

Cincoro (Cinco + oro, which is Spanish for gold) is made from 100% Blue Weber agave, harvested in Jalisco Highlands and Lowlands, capturing the essence of both terroirs. The hand-selected agave is slow-cooked, distilled and aged in underground cellars before it is artfully blended into an exceptional tequila. The aging is done in used American bourbon barrels imported from Kentucky. Cincoro currently offers four different expressions, a blanco, a reposado, which is aged 8 to 10 months, an añejo, aged for 24 to 28 months, and an extra añejo, aged up to 44 months. An exceptional spirit needs unique packaging communicating its qualities, and the brand commissioned Mark Smith, Vice President of Innovation Special Projects at Nike, who designed a sleek contemporary bottle shaped like an agave leaf. The elegant bottle with a crystal stopper has five sides reflecting the five owners, and its base tilts up at 23 degrees to represent Michael Jordan’s jersey number.

Cincoro Extra Añejo is an award-winning small-batch tequila blended from selected barrels aged for 40–44 months, which is far longer than required for extra añejo tequilas. This sophisticated expression comes in the signature agave leaf-shaped bottle made from hand-polished black crystal with golden details.