Size700mL Proof102.2 (51.1% ABV)
Well-aged Glen Grant Scotch is known for its light yet complex and layered taste profile. Distilled in 1998 and bottled in 2022 after 24 years of maturation, the single ex-bourbon hogshead yielded a scant 254 bottles of the 102.2-proof Speyside single malt.
Notify me when this product is back in stock. 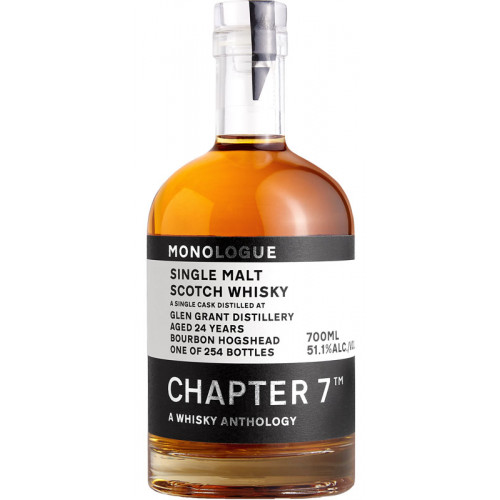 The 20th release in the Monologue series comes from Glen Grant, a Speyside distillery that was founded in 1840 by brothers John and James Grant. The distillery is known for using crisp Scottish barley, much of it still harvested from the same Morayshire fields that John and James Grant used nearly two centuries ago. Each of the Glen Grant stills is equipped with a purifier — Glen Grant is the only distillery in Scotland to use purifiers in both distillations — results in whisky that has a signature fresh and malty flavor. This expression is a particularly well-aged one, having spent 24 years in the single bourbon hogshead. Distilled in 1998 and bottled in 2022, it's a light yet complex and layered whisky that was bottled at 102.2 proof without added coloring and chill-filtration.

Grab one of only 254 bottles of this well-aged Speysider today!

You can expect a fresh bouquet of citrus, apple, vanilla, barley, papaya, and pastry. The palate has a delicious balance of vanilla, apple, citrus, honey, and rhubarb notes that culminate in a citrusy finish with a pleasant sweetness, vanilla, and hints of sandalwood.