Size700mL Proof105 (52.5% ABV)
This single malt comes from Blair Athol, Diageo's workhorse distillery. After spending 12 years in its ex-bourbon hogshead, the whisky was bottled at 104 proof. The hogshead yielded a total of 299 bottles of non-chill filtered and uncolored Highland single malt.
Notify me when this product is back in stock. 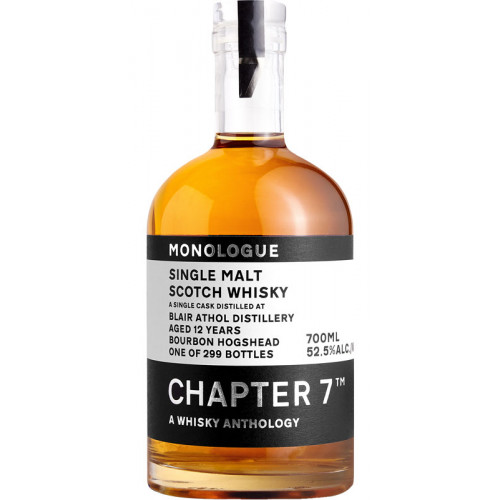 Monologue #23 is a single-cask Highland single malt that comes from Blair Athol, one of Diageo's workhorse distilleries. Built in 1798 in Pitchlory, a lot of the whisky ends up in Bell's Blended Scotch. Distilled in 2009 and bottled in 2022, it's a beautiful 12-year-old that was bottled at 104 proof without chill-filtration or added coloring. The single ex-bourbon hogshead yielded 299 bottles of the nutty, fruity, and malty Scotch.

Get your bottle of this 12-year-old rare whisky today!

Fruity aromas lead the charge on the nose with orange, honey, custard, barley, nougat, brioche, and cappuccino aromas. The orange is mirrored on the palate where it's joined by vanilla, raisin, and cornbread. You'll find pear, pastry, ginger, cinnamon, and bay leaf notes on the finish.