Size750mL Proof99.4 (49.7% ABV)
This Speysider from the Allt-A-Bhainne distillery was finished in casks from the Caol Ila distillery of Islay. This added a touch of smoke to the fruity, floral, and well-balanced single malt. The single cask yielded 298 bottles of the 99.4-proof whisky.
Notify me when this product is back in stock. 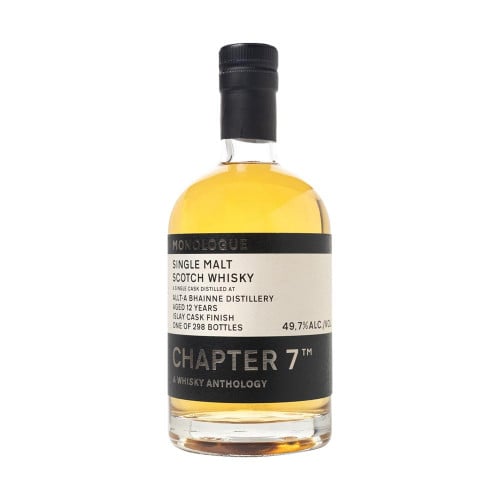 Chapter 7 has three series of expressions: Monologue, Anecdote, and Chronicle. The first are unique single casks, the second once-in-a-lifetime small batches or married atypical whiskies, the third has their aging reserves. This Chapter 7 Monologue 12 Year Old comes from Allt-A-Bhainne, the Speyside distillery that produces one of the main ingredients of Chivas Regal. This is the second time that the distillery has worked with Chapter 7, the first release featuring a 19-year-old that was very well received. This cask of single malt has been with Chapter 7 since 2016, slowly maturing. The team decided to finish it in their Caol Ila first-fill bourbon casks. The 12-year-old was bottled without chill-filtration at 99.4 proof and features an accessible, fruity, and well-balanced profile.

Grab one of only 298 bottles of this delicious Speysider!

The nose is fruity and floral with honey, candied orange, and a hint of smoke on the nose. The palate has butterscotch, peach, honey, gingerbread, and cinnamon spice notes. The long finish is sweet with a touch of citrus and spice.