Be the first to review this product
This set of twelve bottles is part of one of the largest and boldest whiskey experiments ever.
Add to Wish List
Notify me when this product is back in stock.

In 1999, Ronnie Eddins — the former Warehouse Manager at Buffalo Trace Distillery — crossed the Ohio River in search of the finest oak trees growing in the Ozark Mountains. That year, in search of the perfect bourbon, Buffalo Trace began the Single Oak Project — one of the whiskey industry's largest and boldest experiments ever.

Today, we're featuring bourbons from 12 different barrels — Barrels 5, 6, 37, 38, 69, 70, 101, 102, 133, 134, 165, and 166. These barrels were released in as part of Buffalo Trace's ninth lot of Single Oak Project barrels — the remainder of the barrels will be released over the course of the next year. Each of the bourbons in this release were aged in a seasoned barrel with a #3 char, and entered the barrel at 125 proof. In addition, all the barrels in this release were aged in Warehouse L, which is composed of concrete.

To date, approximately 2,000 bourbon aficionados have gone to www.singleoakproject.com to review a Buffalo Trace Single Oak Project Kentucky Straight Bourbon Whiskey. These whiskey reviews will determine the perfect bourbon! Once you've reviewed a bottle from a particular barrel of Project Oak Bourbon, Buffalo Trace will provide you with detailed information regarding the provenance of that barrel.

"Obviously the search for the perfect bourbon is a long way from being completed,"continues Comstock. "Consumers and industry experts each have their own favorites. It's a perfect time for newcomers to get involved with the project and weigh in with their reviews online to help us pick the number one bourbon."Pick up this lot of 12 different Project Oak Bourbons and vote today!

Varies with each bottle 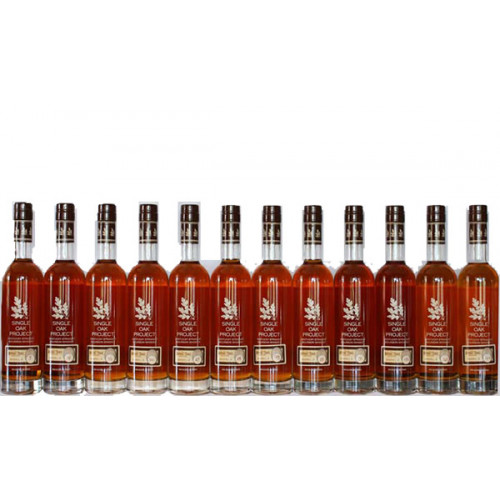